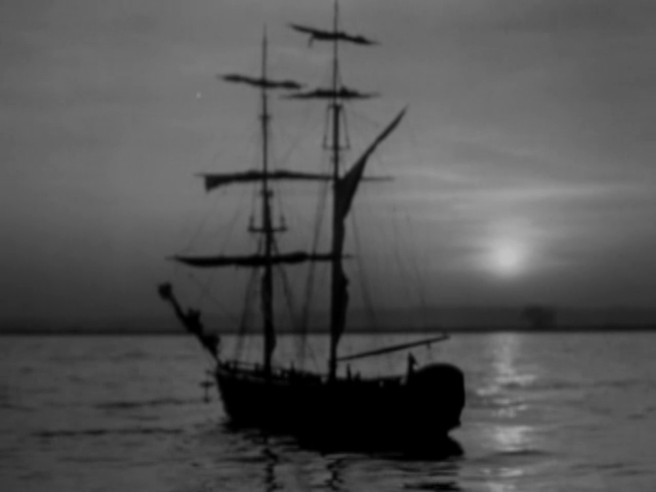 This post is part of the 5th Annual Favourite TV Episodes Blogathon hosted by Terence Towles Canote over at A Shroud of Thoughts. I’ve chosen the third episode of The Buccaneers (1956-7), one of a number of swashbuckling shows produced by Sir Lew Grade’s ITC production company in the 50s’. The Buccaneers is set during the Golden Age of Piracy in the early 1720s’ as Woodes Rogers, takes over as Governor of Nassau and offers the King’s Pardon to British pirates if they agree to mend their ways. The show ran for a single season and gave an early leading role to the ferocious Irish actor Robert Shaw.

However its star doesn’t make an appearance until episode 3. So having set up Rogers (Alec Clunes) as the protagonist in the first two episodes the writers now have to do the same work again with Dan Tempest (Shaw). ‘Captain Dan Tempest’ essentially functions as a handover between Rogers and Tempest establishing the latter as the show’s leading character. Shaw would go on to bigger things in the 60s’ and 70s’ often playing tough and cynical characters so it’s interesting seeing him as a young man playing a conventionally heroic type. 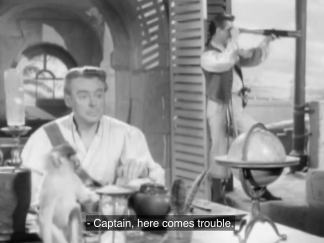 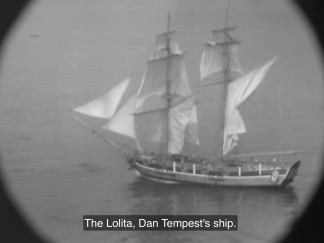 Tempest is initially seen as the antagonist. Having been at sea for months Tempest has no knowledge of the King’s Pardon or that the time limit for accepting the offer has expired. One of the locals tries to warn him Nassau is now under the control of Rogers but he refuses to listen instead demanding to see his girlfriend Lolita. Somebody seems to have noticed that Tempest having a girlfriend and a ship called Lolita in a show aimed primarily at a young audience was ill-advised in an era when Nabakov’s famously controversial novel was banned under the obscenity act. Lolita (Judy Wyler) the girlfriend only lasts for two episodes while the ship’s name was quickly changed to The Sultana. 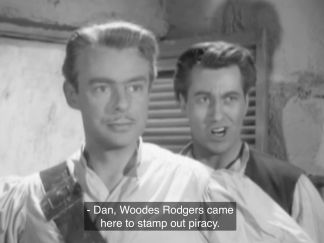 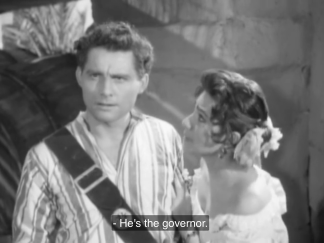 Tempest is very aggressive at first, threatening to slice off his crew’s ears and rip out their entrails if they damage their haul as it’s being unloaded. This behaviour seems incongruous with the loveable but decent rogue the character later becomes. Tempest’s stubborn refusal to listen to warnings costs him dearly when he boasts about capturing a Spanish galleon in the local tavern without realising he’s confessing to piracy in front of the new Governor. Tempest has heard of Rogers and respects him. “The Spaniards in the Pacific still tremble at the mention of your name.”  But he has no intention of being arrested and chooses to fight. 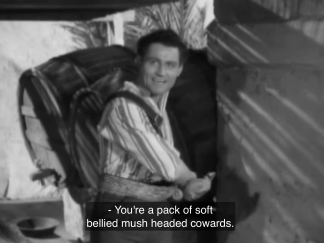 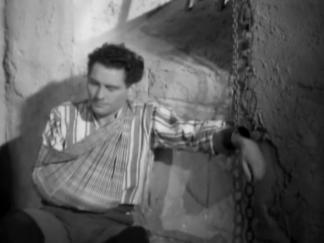 “Ah, you know that one too,” says Rogers when Tempest blocks a fancy sword manoeuvre and that wee line of dialogue posits them both as being equals. Rogers eventually disarms Tempest and arrests him. Having made Tempest out to be a dangerous figure the writer Terence Moore now has to redeem him in the eyes of the audience. While the sentence for piracy is death, Rogers instead shows leniency and offers Tempest land and a profession cutting down dyewood trees for shipment. 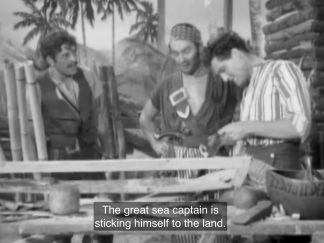 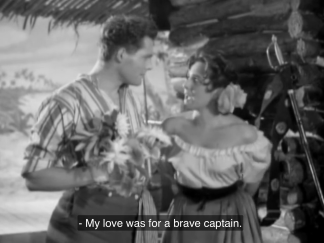 Episodes were only 25 minutes long and each story had to be resolved within that timeframe. So the turnaround from Tempest switching from a snarling thug to a tamed land dweller happily working the land feels a little abrupt. Tempest becomes a figure of fun for his former shipmates who mock his new law-abiding ways. This doesn’t bother him too much because he can always beat them up, but his beloved Lolita turning out to be a pirate groupie and ditching him pushes him over the edge. Grabbing his sword he returns to his ship.  Unfortunately Rogers has had eyes on Tempest the whole time and is already onboard. 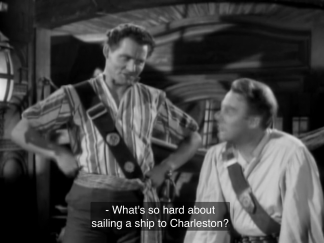 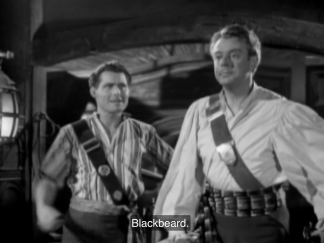 It’s interesting to note the difference in post-Empire contemporary retellings of the story of Nassau to this show made back in the 50s’. Starz recent hit Black Sails and the video game Assassin’s Creed: Black Flag present Rogers as a much crueller figure than the kindly overseer Clunes portrays. Indeed it seems the real-life Rogers was every bit as brutal as the pirates. Some who accepted the King’s Pardon and were able to return to sea as privateers with a letter of marque legally allowing them to plunder ships from hostile countries, while others such as the unfortunate William Kidd became pirate hunters and turned on their own. Tempest’s remit is less violent. He’s asked to transport cargo including his own dyewood to another island. This relatively simple journey is complicated by the presence of Blackbeard (George Margo) whom Rogers ran out of Nassau in the season opener and now patrols the waters in his vessel the Queen Anne’s Revenge. 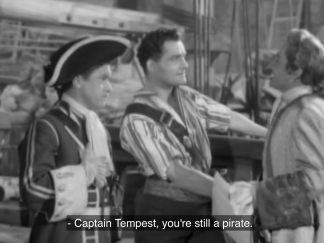 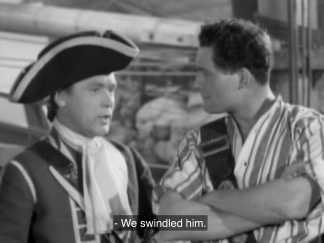 Next up Moore has to set up a Bogart/Claude Raines beautiful friendship between the maverick Tempest and the over-officious Lt. Beamish (Peter Hammond). While he’s often the comic relief in The Buccaneers he’s also a decent sort and the relationship between the two evolves into an effective partnership as the series continues. Beamish’s own delight at realising he’s helped Dan swindle a merchant who tried to underpay them is a particular highlight in this episode. 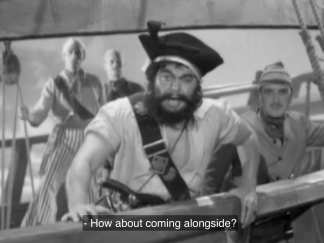 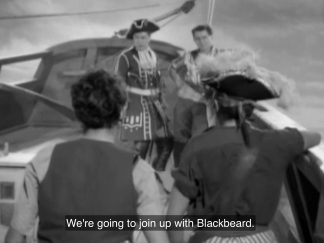 On their journey back they are forced to pull another con, this time on their own crew who are very eager to join up with Blackbeard and go carousing. Tricking them into chasing Beamish into the hold Tempest locks them in. Outgunned and outmanned Tempest shows his ingenuity by taking out Blackbeard’s mizzen mast with cannon fire incapacitating the Queen Anne’s Revenge and allowing them to break through the blockade. Though the show was clearly filmed on a stage The Buccaneers used a real ship moored off the coast of Cornwall and a part replica built in the studio to make the seafaring scenes feel more authentic. 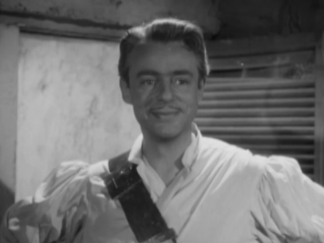 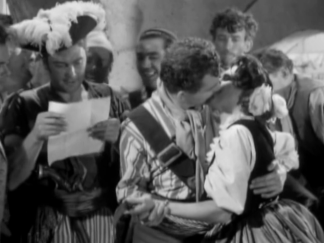 Back on Nassau as the locals celebrate the crews return, Rogers looks on with an expression that says “my work here is done” and with this final close-up Alec Clunes ends his three episode run on The Buccaneers.