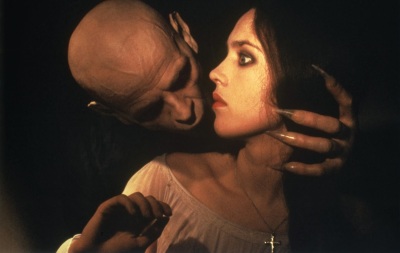 Back in cinemas just in time for Halloween Werner Herzog’s remake of F.W. Murnau’s Nosferatu: A Symphony of Horrors (1922) is an idiosyncratic take on the vampire movie. As with his recent reworking of Abel Ferrara’s Bad Lieutenant (1992) it resembles the original but has a lunatic poetry of its own. Instead of replicating the expressionist techniques used by Murnau, Herzog filmed on location in Germanyand Romaniaand makes wonderful use of natural light.  The opening credits play over shots taken of mummified corpses twisted in agony as Popol Vuh’s haunting somnambulistic music sends a shiver down your spine.
Nosferatu: A Symphony of Horrors is the first screen version of Bram Stoker’s novel ‘Dracula,’ Murnau adapted the story without first acquiring the rights. Changing the Count’s name to Orlock couldn’t hide the plagiarism and Stoker’s widow sued, although mercifully the court rejected her plea to have the film destroyed. Herzog is free to call his vampire Dracula and keeps the main story from Stoker’s novel intact. Jonathon Harker (Bruno Ganz) travels to Transylvaniato negotiate a property deal with the Count.  Dracula traps Harker within his castle and leaves to seek out his prisoner’s wife. There are minor changes from the novel; the Harkers live in the coastal German town of Wismar. Mina, the leading lady in Stoker’s novel is demoted to a supporting role, while Lucy (Isabelle Adjani), takes on her characteristics of purity and innocence and also becomes Jonathon’s wife. Dr Van Helsing is no world authority on vampyres, but an ageing ineffectual small town Doctor with no real knowledge of what he is fighting against.
Herzog regular Klaus Kinski has roughly the same look as Symphony’s Dracula Max Schreck. Kinski retains the black coat, pointy ears, bald head and fang-like teeth, but his face appears more human than Schreck’s misshapen monster. Kinski’s vamp is remarkable, as pitiful as he is unsettling. Alone in the world there is nobody else like him. Nor are there vampire babes hiding in his castle waiting on his every command, as if they were vampiric versions of Hugh Hefner and The Girls of the Playboy Mansion. Unlike Christopher Lee’s tall, suave aristocrat, who takes women at will, Kinski’s vamp literally begs Lucy to let him drink her blood and like a lot of bald men on the pull he is turned down flat. The eroticism present in the post Anne Rice vampire movie is entirely absent. Dracula feeds like a parasite, not a lover. All he brings is death, not so much by his own hand, but by the pestilence that follows him, the rats streaming into the town and infecting it with the plague. 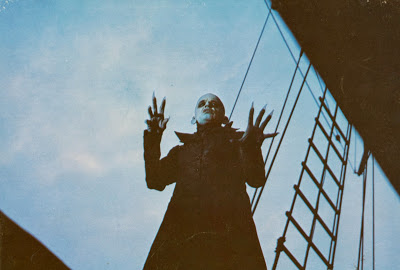 Bruno Ganz and Isabelle Adjani are both touching as the lovers destroyed by Dracula. Often these roles are a thankless task for actors as the Harkers are ciphers for moral innocence, but both Ganz and Adjani have the ability to flesh them out and make them seem real. Herzog conveys the intimacy between these young lovers in subtle ways, most notably a long-shot of them embracing by the sea. Most directors would use a close-up and have them express their love through words, but Herzog keeps his distance as if getting in close would be an intrusion. Adjani in particular is a spirited heroine, with her pale skin and jet black hair rendering her as haunting in appearance as Kinski’s Dracula.
Herzog provides some spectacular images, such as the town square filling up with the townspeople carrying coffins, or of a last supper as a group of people infected with the plague hold a farewell dinner party for themselves. In one astonishing wordless sequence Harker (Bruno Ganz) leaves a village on foot, walking past the side of a cavernous river, climbing past a waterfall towards the peak of a mountain. As Harker rests and takes in his surroundings Herzog cuts between shots of him and the mist-covered mountains until Dracula’s Castle reveals itself as a ruin on the horizon.
The German title is Nosferatu: Phantom Der Nacht which suits the film. Kinski’s ghostly figure is at once menacing and pitiable. Another of Herzog’s lonely obsessive outsiders at odds with the world around them and straining against its limitations. Herzog’s film is more unsettling than horrifying, it’s unease emanating from the hypnotic visuals and the feeling of doom present throughout. Often overlooked even by Herzog fans Nosferatu the Vampyre is one of his finest films and a worthy companion piece to Murnau’s masterpiece.