Skip to content
October 30, 2012January 7, 2016 ~ kevinsturton ~ Leave a comment
Only wrote a brief introduction for this screening as a guest speaker was due to make an appearance. If you’d told me when The Station started screening movies that one night there would have been a full house laughing uproariously at a Ken Loach movie I would have thought you were mental. 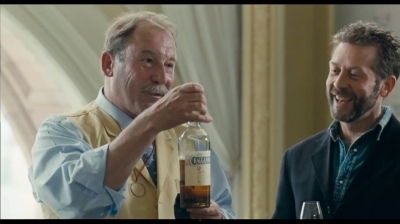 ‘malt whisky epitomises the inherent dichotomy of the Scottish psyche – at once passionate and rational, romantic and ironic, mystical and sceptical, heroic and craven, full of laughter and despair.’
Charles Maclean, Malt Whisky (1998)
Scottish cinema can generally be divided into two categories – gritty urban dramas (Trainspotting, Neds) or charming escapism (Local Hero). Ken Loach’s The Angel’s Share manages to cover both territories with this tale of a young tearaway who finds redemption through a developing interest in Malt whisky. Robbie (Paul Brannigan) is a bright lad but never far away from trouble. Unable to extricate himself from a long-time feud with a local gang and hated by his pregnant girlfriend’s family he is running out of chances until kindly community services leader Harry (John Henshaw) takes him under his wing and introduces him to the pleasures of malt whisky. Loach and Glaswegian writer Paul Laverty have collaborated on fourteen other films several of which have been set in Scotlandincluding Carla’s Song (1994), My Name is Joe (98), and Ae Fond Kiss (2004). Always sympathetic to the plight of the underprivileged their work together particularly when dealing with Scots working class life has a great deal of humour present. The Angel’s Share is one of Loach’s warmest films, avoiding his tendency for didacticism but still managing to pass social commentary while being extremely entertaining.
November 16, 2011January 7, 2016 ~ kevinsturton ~ Leave a comment

I’m a Scot so I thought I’d list my ten favourite films set in my homeland. They are arranged by date rather than by order of preference. 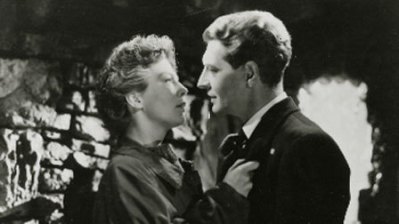 Joan Webster (Wendy Hiller) is on her way to the Hebridean isle of Killoran (a made up place, filming was done on Mull) to marry a rich industrialist. Joan’s materialistic approach to life is challenged by her experiences in Scotland. Especially when she begins to fall for a fellow traveller, a Naval Officer played with such remarkable charm by Roger Livesey you find yourself pointing at the screen saying “him, that one, you stuck up posh bint.” The whimsical elements are never overdone by Michael Powell and the suggestion the Scottish landscape can have a profound effect on a visiting outsider was revisited by Bill Forsyth in Local Hero (1983).
Whisky Galore (Alexander Mackendrick 1949) 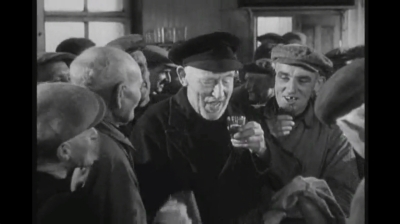 Though sometimes attacked for being twee and patronising Whisky Galore is much more cynical than its reputation suggests.  Mackendrick’s dark worldview which would be most evident in The Sweet Smell of Success (1957) is present in this Ealing comedy too.  The pompous incomer Captain Waggett tries to apply the law and prevent the islanders raiding a stricken vessel but the locals run rings around him.  Wagget’s choice is simple, assimilate or leave.
Culloden (Peter Watkins 1964) 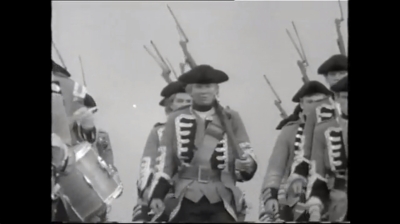 A sober antidote to the romantic myths that have sprung up around the battle at Culloden, Watkins tells the story from the perspectives of everybody involved.  The Highlanders are starving and ill prepared. Lowland Scots fight for the Crown believing it is in the best interests of Scotland.  This was no glorious failure but a tragic waste of life.  A pioneer of the drama-documentary Watkins used handheld cameras and non-professional actors to give a sense of realism.
The Private Life of Sherlock Holmes (Billy Wilder 1974) 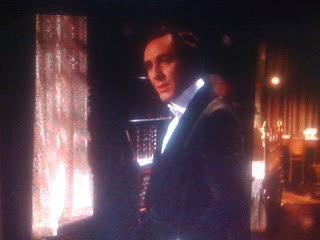 Holmes and Watson take the sleeper train to Inverness to solve a case involving a beautiful amnesiac, a sextuplet of missing circus midgets, and the Loch Ness Monster. Sinister locals warn them to stay away from the Loch. Such encounters are unlikely to happen to anybody visiting these days. Loch Ness is Scotland’s answer to Disneyland; though unlike Uncle Walt, our monster never existed. Just kidding Walt Disney’s Estate. A ruined masterpiece, United Artists cut great chunks out of the film.  Miklos Rozca’s score is one of his best. Robert Stephens is perfect as Holmes; world-weary, and funny, he is wise enough to know love is best avoided whenever possible but still can’t help himself. 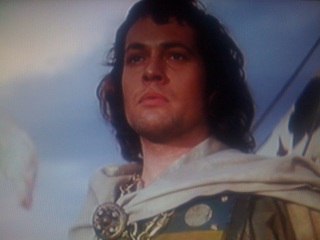 Orson Welles 1948 version is the more imaginative, but Polanski’s brutal approach suits Shakespeare’s play. It’s a disturbing film; the violence is intimate and gruesome.  Given events in his own life before he made this film you can understand why Polanski never held back. Jon Finch’s understated Macbeth attracts criticism from the theatrically inclined because his speeches do not soar, but it’s a great film performance.  Bizarrely Macbeth remains the only film to be financed by Playboy Magazine, which may explain why Francesca Annis spends half the film naked. Still at least she wasn’t wearing bunny ears and a bobtail. I still can’t believe our English teacher showed this to us when we were kids.
The Wicker Man (Robin Hardy 1973) 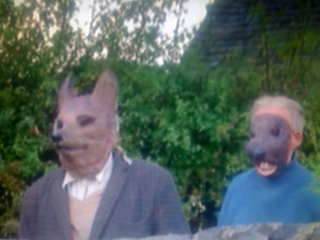 Scotland’s weirdest film is a horror musical contrasting Scots Calvinism with old fashioned folk rituals. Morally upright copper Sergeant Howie (Edward Woodward) is summoned from the mainland to help search for a missing girl on an island. Trouble is nobody seems to know anything about the girl. The locals are clearly nuts, even the ones who aren’t Lindsay Kemp. There’s bawdy singing in the local pub, couples fornicating outside it, and Christopher Lee wandering around in a kilt. I swear I’ve seen three different version of this film and I’ve no idea which works best. A cinematic one-off, unsettling in its use of locations and quite how anybody thought they could replicate this either through a remake or a sequel is beyond me. 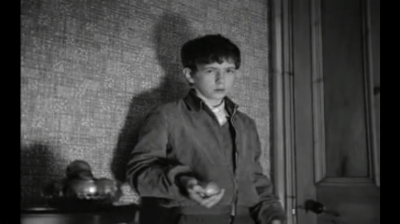 Douglas is one of Britain’s great lost film directors and this is his finest work. My Way Home is the final part in a trilogy based on Douglas’s own childhood. Jamie’s harsh upbringing was the focus of My Childhood and My Ain Folk. Now 17, he is used to feeling worthless, being hit, or being patronised by those higher up the social ladder. While carrying out his National Service abroad, Jamie is befriended and drawn out of his shell by an upper-class Englishman. Jamie’s realization that he can fulfill his artistic intentions is one of cinema’s most moving and hopeful coming-of-age stories. 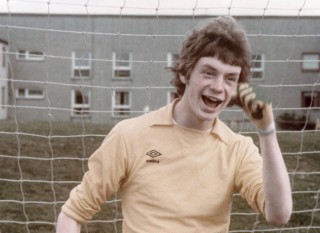 Hard to pick between this and Forsyth’s Local Hero, but Gregory’s Girl just shades it for its originality. Gawky schoolboy footballer Gregory (John Gordon Sinclair) makes the mistake of telling his coach that football is only a game. Blasphemy! As punishment he’s put in goals and his place in the team goes to a girl, Dorothy (Dee Hepburn). Gregory is smitten, but unfortunately he is as hopeless off the pitch as he is on it. Forsyth isn’t so much interested in football, as the pains of adolescence and the humour he can derive from both. It’s also as far as I’m aware the first Scottish film to be set in one of the New Towns that sprang up in the late 70’s.
Highlander (Russell Mulcahy 1986) 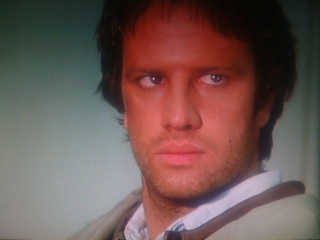 Handsome, French-accented antiques dealer Russell Nash has a dark secret, he is Scottish. MacLeod has been around for a few hundred years and now resides in New York.  While its quirky star Christopher Lambert is generally considered to have attempted the worst Scottish accent at the movies, his detractors are missing the point. This is a movie about an immortal engaging in an ongoing battle through the centuries to win a mystical prize. There is no need for realism. Besides, Lambert is not the first Scot to speak with a French accent; Mary Queen of Scots for instance, was more Catherine Deneuve than Cathy from Kelvingrove.  If you are snobbish about watching action movies, content yourself with viewing Highlander as mediation on being an emigrant; you can leave your homeland behind, you can change your name, you can decapitate a whole bunch of people, but you’ll still find yourself day-dreaming about the place you came from.
Morvern Callar (Lynne Ramsay 2002) 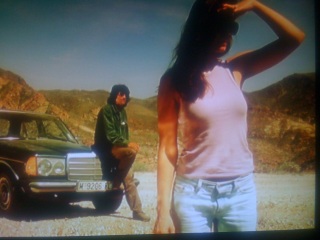 Few films have captured the longing to escape from a small-town existence better than Lynne Ramsay’s adaptation of Alan Warner’s novel, Morvern Callar. Supermarket check-out girl Morvern awakes to find her boyfriend has killed himself. On his computer is a finished novel which she claims as her own. Keeping his death a secret, Morvern makes some money by winning a publishing deal and travels abroad. The film has its flaws. Warner’s novel is very funny but Ramsay has yet to show any signs of having a sense of humour at all.  Samantha Morton’s decision not to attempt a Scots accent means Morvern sounds like she’s an incomer rather than a girl who’s never been far from her hometown.  Despite this Ramsay fashions an elliptical, near wordless gem, in which Scotland feels like the loneliest place on earth and life is elsewhere.