My contribution to the Adoring Angela Lansbury Blogathon hosted by Gill at Realweegiemidget Reviews is Black Flowers for the Bride, a 1971 movie directed by Broadway legend Harold Prince and co-starring Michael York. It’s based on a 1965 novel by Harry Kressing called The Cook although it’s a very loose adaptation taking only the premise and becoming very much it’s own entity. Lansbury plays the glamorous matriarch of a once great family now fallen on hard times but who are still the custodians of a magnificent Bavarian style castle they can no longer afford to run.

In Kressing’s novel a mysterious black clad stranger called Conrad arrives in a small town and inveigles his way into the position of chef for a rich family. Gradually increasing his power over his employers and the townsfolk through a combination of intimidation, flattery, and his considerable talents as a chef, he essentially becomes the ruler of the entire area leading them in a series of endless culinary orgiastic feasts. It’s like Kafka rewrote Dashiell Hammett’s Red Harvest after watching The Servant (Joseph Losey, 1963). So I kind of prefer the UK title for this movie than the anodyne Something For Everyone. Black Flowers For the Bride sounds more like a giallo, more fitting of the fairytale aspects of Kressing’s novel and the approach director Harold Prince takes here although the movie is less Gothic, and more in tune with bright stylings of Jacques Demy’s Donkey Skin (1970). 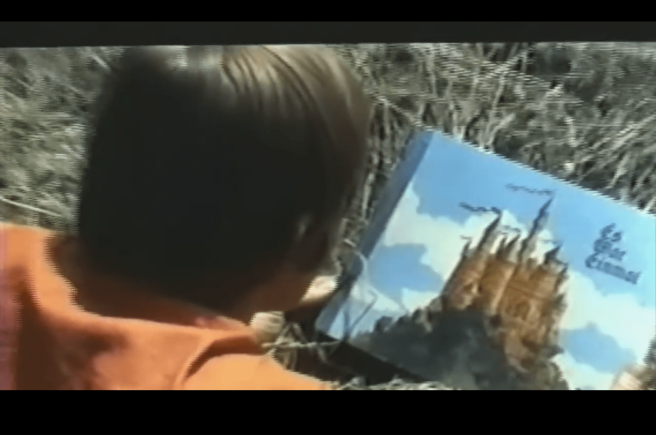 “When I was a child my grandmother bought me a picture book. In it was a castle just like that.”

Instead of a tall menacing figure in black, Konrad (now with a K) is peak period Michael York dressed in a red sleeveless shirt and a pair of khaki shorts like he’s one of the Famous Five on a cycling holiday. The first person he meets is a priest trying to catch a rare butterfly in a meadow below a beautiful castle. He’s been at this for thirty years but never got close to catching one. The castle belongs to an impoverished Countess (Lansbury) and is now lies empty. “These are the bad new days” he says. The butterfly lands on Konrad’s hand and he gently gives it over to the priest. We know immediately Konrad is a man who can make things happen for people and win them over with his easy charm and good looks. And he still has that picture book his grandmother gave him.

In town Konrad visits the local pub. “Never trust strangers” he tells the barmaid when she tells him he can pay when he leaves. Sometimes he does this, just tells people he’s dangerous straight away but they never notice. She likes him and gives away her star-sign, Capricorn. So now Konrad is a Capricorn, or maybe this time he’s telling the truth instead of what people want to hear. We never find out where Konrad is from or anything about him. We know what he wants though and by asking a few questions he finds Rudolph (Klaus Havenstein), footman to the Countess. Helping him by removing a splinter from his injured hand Rudolph gratefully offers to find Konrad work with the Countess.

“Nobody can sell that castle. It’s a birthright.”

The first time we see Lansbury she’s wearing a glamorous black and white dress with matching headscarf rounded off with dark sunglasses. It’s an outfit worthy of Joan Collins in Dynasty. Something they’d make her wear when she’s in a vengeful mood. In fact everybody is wearing dark colours and there’s a listlessness about the place. Like the end of a Fitzgerald novel where only the broken people are left and all the parties are long since past. Even the dogs belonging to the 16 year-old daughter Lotte (Jane Carr), two big powerful Great Danes, are colour co-ordinated to match.

The Countess is also reading a copy of Vogue magazine. This threw me in the same way a character suddenly using a mobile phone in Anna Biller’s The Love Witch (2016) caught me off guard. The traditional costumes and the way the Austrian/Bavarian setting is utilised makes it feel like a movie set in the pre-war 30s’ but the edition of Vogue is clearly a contemporary 1970s’ edition rather than one from that era. So the bad new days the priest referred to is a post-war period full of uncertainty. The old social order was destroyed by the war and nothing has replaced it. “Do I know your father, or any of you family?” which is how rich people say hello to young people. What they mean is “Do you belong?” Konrad has no papers or identification which makes head servant Klaus (Wolfred Lier) suspicious. So Konrad is sent on his way. 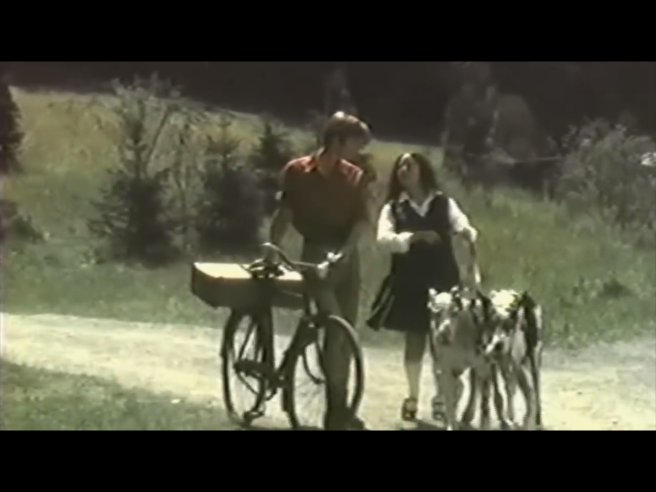 Lotte like Konrad is young and inquisitive and she follows him as he leaves. She talks about the family’s declining fortunes and watching her father die. She sees everything does Lotte. Her two big dogs seem to like Konrad. “They only approve of murderers and perverts. Which are you?” she asks Konrad as he leaves. “Both” he answers. She seems delighted. “I knew it!”

While the novel’s Conrad is an otherworldly almost Satanic presence, Konrad is more of a Tom Ripley figure. A social climber determined to improve his own position by any means necessary. Only his smile, which turns cruel if the camera stays on it for too long gives him away. If there aren’t any vacancies available he’ll just make one. Konrad temporarily gets a job driving a rich family around after accidentally on purpose slamming a door on their chauffeur’s hand, then “kindly” offering to replace him for the day. He didn’t choose the family at random, spying their beautiful daughter Annaliese (Heidelinde Weiss) at the opera and catching her eye. With the money he earns from driving he takes Rudolph out for drinks then casually pushes him in front of a train on the way home. And out of nowhere the dogs appear by his side, because as their owner said earlier, they approve of murderers. 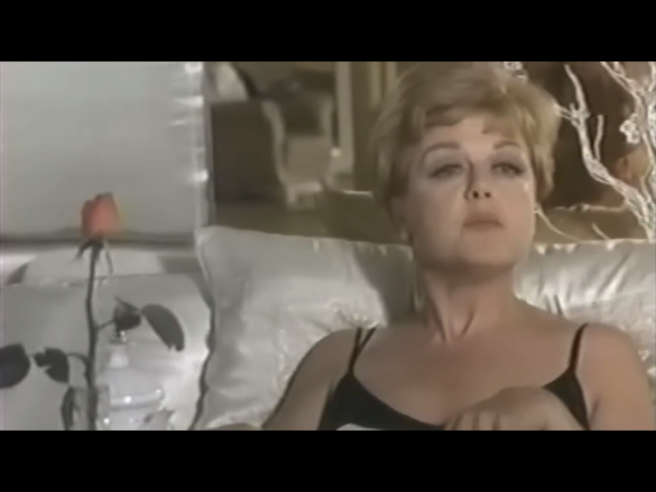 “I was not intended to be left behind. I have no talent for it. One day, another day, without an echo of how it used to be. When your world has gone you’re your own ghost.”

The Countess spends most of her time alone surrounded by heirlooms of her late husband. She’s given up and withdrawn from any involvement with the village instead hiding away and saying things like “there are no men anymore, only facsimiles.” Once there were lavish parties and events but now she won’t even open a new municipal building. Konrad has the impertinence to approach her after Rudolph’s funeral and offers his condolences. She does not remember him. The priest however greets him warmly as a friend and persuades the Countess to hire Konrad as Rudolph’s replacement.

So Konrad takes up his duties as a footman. Eyes are on him though. Firstly the son Helmuth (Anthony Higgins) has taken to gazing longingly from the verandah as Konrad goes swimming in the lake. Secondly Klaus is suspicious. Nazis were very fond of asking for people’s papers too and when Konrad sees him flinch during a dinner party where the local Mayor launches into a passionate anti-fascist speech he knows he’s got him. When Klaus demands Konrad leave after discovering him with Helmuth he simply goes to the Mayor and reports him as a Nazi. Klaus’s room is filled with Third Reich memorabilia including his own father’s SS uniform and he agrees to leave quietly to avoid any bad press for the Countess. Konrad now has control of the household and sets about to finance the reopening of the castle.

“Pour me a drink, a tremendous drink, and pour yourself one.”

Having seduced Annaliese and Helmuth Konrad now plans to marry them by persuading the Countess to host a lavish garden party and posit the idea to her rich family. They’re new money and love the idea of being aristocrats. The Countess is appalled, “shameless, outrageous, utterly immoral,” but quite likes the idea. Konrad’s attentions awaken the Countess from her melancholy and she destroys the shrine to her husband. “You are the new man, forcing us to come into the world. A new world, a savage world.”  Helmuth’s homosexuality and Annaliese’s mad love for him pose a problem but nothing driving her and her family over the side of a mountain road can’t solve. Helmuth becomes a very rich widower. Konrad recovers from his injuries and intends to marry the Countess but he’s underestimated somebody.

“I wrote the memorandum this morning, I wanted to seal it with my own blood but I settled for sealing wax…”

Lotte may have seemed like a charming little nuisance, but she knows everything and as I mentioned earlier she sees everything. “Murder for Rudolph, something or other for Annaliese, sodomy with a minor for Helmuth, and of course poor Herr Pleschke.” Conrad in the novel became the overseer of his own kingdom, Konrad in the film is undone by a letter from a teenage girl. “What are you going to do?” “Go to the police I suppose. That’s what you’re meant to do.” Then adding “Isn’t it?” to let him know she’s offering him another way out and holding out a handkerchief to see if he’ll clean her shoes as commanded. Like most fairytales the film ends with a wedding albeit one that feels more like a funeral for everybody except the bride.

I wondered while I was watching Black Flowers for the Bride if this was intended as a reactionary work? Does Konrad, even in the well-bred form of Michael York, represent the young working-class people who were able to better themselves and move beyond the limitations of their social class? In the end the Establishment rights itself and relegates Konrad to a subservient position so maybe it’s a warning for young rebels. They’ll always get you in the end. Fairy tales usually layered with hidden meanings.  In that respect Black Flowers For the Bride would make a great double-bill with another Lansbury movie, Angela Carter and Neil Jordan’s collaboration The Company of Wolves (1984), which also ends with a young woman taming and forming a union with a wolfish outsider.