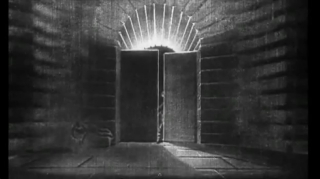 The movies were a regular pursuit for the writer Franz Kafka and his friends. Kafka died before the advent of sound, but lived long enough to see the best of the Silent Era. Willy Haas recounted (1) in the magazine he edited ‘The Literary World’ how he saw Kafka crying at footage of Berlin, his dream city; the place he longed to escape to. Kafka understood the power of the image, how it can haunt the viewer; the loss that can be involved in capturing in a place, or a person on film forever. “Dearest pictures are beautiful, pictures are something we can’t do without, but they are a torture too,’ (2) Kafka writes in his unfinished novel ‘Amerika.’
Kafka’s stories are cinematic; the images Kafka creates in the mind stay with you. Though the word Kafkaesque is often used to describe unyeilding beauracracy, and the powerlessness of the individual against the state Kafka’s stories deal mostly with maladjusted, fragile men, who seem to bring misfortune upon themselves despite their attempts to fit into the world around them. Kafka is also a great comic writer, his work can be tragic, but it is never without humour. A number of films have been adapted from his work, while others have used the author’s own life as inspiration.
The Trial (Orson Welles 1962) 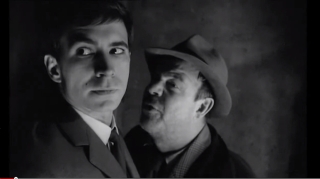 As well as adapting ‘The Trial,’ Welles manages to find room for Kafka’s short story ‘At the Door of the Law.’ Welles opens the film by narrating this allegory about a man trying to gain access to the law, but being made to wait for a lifetime without ever knowing why. This addition suits The Trial perfectly. Josef K (Anthony Perkins) finds himself accused of an unnamed crime and tries to seek justice. Welles thought Josef K was guilty for being complicit in an unjust regime, but makes his Josef K more resistant to his fate than Kafka’s. Welles understands Kafka’s vein of black comedy though and brings a Noirish feel to The Trial.
The Insurance Man (Richard Eyre 1986)

One of two plays written by Alan Bennet about Kafka, the other being ‘Kafka’s Dick.’ Franz (Robert Hines), a young factory worker tries to ascertain whether he is entitled to compensation after blue patches appear on his skin. As he is sent from one part of a large building to another, he encounters various other claimants, in his search for the elusive Doctor Kafka (Daniel Day-Lewis). Darkly funny, with a brief world-weary show-stealing turn from Geoffrey Palmer, “people will be wanting compensation for being born next,” The Insurance Man is arguably the best Kafka film to date.
Kafka (Steven Soderbergh 1991)

Palme D’Or winner Steven Soderbergh crashed and burned with his second movie. Torn apart by US critics it eventually appeared on video in 1994. Jeremy Irons makes for a charming, diffident Kafka. Though Soderbergh and his screenwriter Lem Dobbs present a version of what author James Hawes (4) refers to as the ‘Kafka myth,’ it entertainingly combines Kafka’s life with elements of his own fiction.
Franz Kafka’s It’s a Wonderful Life (Peter Capaldi 1993)

Inspired by Capaldi’s wife mistakenly referring to the Frank Capra classic It’s a Wonderful Life (1946) as Franz Kafka’s It’s a Wonderful Life, this Oscar-winning short sees Kafka (Richard E Grant) afflicted with writer’s block on Christmas Eve. Kafka struggles to find a theme for his short story ‘Metamorphosis’ but his work is continually interrupted by Christmas well-wishers. Cleverly riffing on Capra’s movie and Kafka’s writing the production design by John Beard is beautiful and lends a Brother’s Grimm element to the film.
The Castle (Michael Haneke 1997)

Austrian doom-meister Michael Haneke made this version of Kafka’s unfinished novel for television. The late Ulrich Muhe is the landscape surveyor forever waiting for an invite to the castle. As gloomy as you would expect from Haneke it is also quite funny, and one of the director’s best films. Characteristically spare and focusing on beauracracy and the misuse of authority, key themes in both Haneke and Kafka’s work.
Metamorphosis (Valeri Fokin 2002) 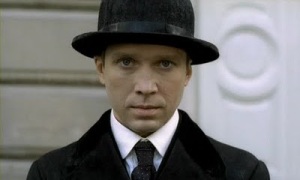 Though Kafka’s work is almost synonymous with the absurd bureaucracy of the Communist regime, he is not well known in Russia. No surprises there, as the Communists banned his work. Russian director Valeri Fokin puts together a fine production of ‘Metamorphosis’ yet it has one glaring flaw. Neil Jordan once wrote (5) about the difficulty of adapting ‘Metamorphosis.’ How do you show the protagonist Gregor Samsa was once human? Fokin tries to solve this by having the actor Yevgeni Mironov pretend to be an insect, but this does not work. Gregor must become something other, a physical transformation needs to take place for the story to work properly.
1. Haas, Willy ‘The Literary World’
2. Kafka, Franz ‘Amerika’
3. Interview with Huw Weldon, BBC 1962
4. Hawes, James ‘Excavating Kafka,’ Quercus, 2008
5. Jordan, Neil ‘The Crying Game – An Original Screenplay,” Vintage Random House 1993, pvii,
November 18, 2011January 7, 2016 ~ kevinsturton ~ Leave a comment

Prague 1919. Insurance clerk Kafka (Jeremy Irons) investigates the disappearance of his friend and colleague Eduard Rabin. Eduard was sent by his employers to The Castle, an appointment he kept, but never returned from. Gabrielle, Eduard’s lover and a member of an anarchist group draws Kafka into the mystery by trying to recruit him into her organisation.

Although Kafka rejects her offer his interest in Eduard’s disappearance is piqued. Kafka discovers others have gone missing after being sent to The Castle, including a noted surgeon, Dr Murnau (Ian Holm). Now there are strange creatures wandering the streets of Prague at night and Kafka is being followed by the enigmatic Inspector Grubach (Armin Mueller-Stahl).

James Hawes referred to the presentation of Franz Kafka as a solitary withdrawn figure as the ‘Kafka Myth’ in his 2009 book Excavating Kafka.  Kafka was apparently a sociable and charming figure until his health began to decline. However Dobbs uses a similar approach to David Cronenberg in his William Burroughs adaptation Naked Lunch (1991) in the same year combining parts of the author’s life with his fiction.

Kafka did work for an insurance company and wrote through the night. There are hints in the film of his troubled relationship with his father and his inability to commit to a relationship. There are allusions to his work most notably in the presence of The Castle, which in Kafka’s fiction is unknowable, and unreachable, but here reveals its secrets, although they are fairly banal compared to Kafka’s nightmares.

Steven Soderbergh won huge acclaim and the Palme ‘D’Or at the Cannes Film Festival for his debut movie Sex, Lies and Videotape. Following up such success with his second film was always going to be difficult and making a black and white semi-fictional biopic of Franz Kafka using techniques borrowed from German Expressionism is probably asking for a kicking. Kafka was initially released in the US in 1991, but it would be another three years before it briefly turned up in a handful of UK cinemas.

Although Kafka is regarded as a miserabilist his writing is often very funny. The masterful short story ‘The Rebuff’ is barely half a page long, but skewer’s the romantic longing of both sexes with a perfect aim. The preference for films about, or based on work by ‘serious’ writers, and few are taken as seriously as Kafka, is that they be serious.

Witness the austere and lifeless version of The Trial (David Hugh Jones 1993) with the perfectly cast Kyle MacLachlan trapped in a lousy production, just as surely as Josef K is trapped by the law. Lem Dobbs screenplay for Kafka has plenty of humour and Soderbergh has essentially placed the great novelist in a highbrow zombie film, like The Third Man (Carol Reed 1949) crossed with George Romero. Maybe this seemed incongruous to some critics, but it is closer to the spirit of Kafka’s work than they realise.