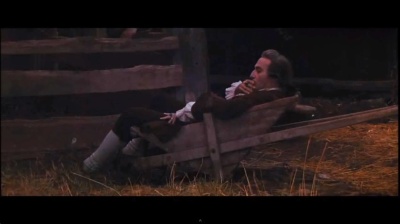 Two great seducers, Casanova and Dracula meet in Spanish director Albert Serra’s latest but this is no playful horror movie. In fact I’m not entirely sure what Story of My Death is meant to be. Serra apparently shot 400 hours of footage for the film which beggars belief because hardly anything happens during the film’s two and a half hour running time as it is. An aged, repellent, and decadent Casanova eats a lot, gives half-baked philosophical advice on the nature of women (“women are all the same”), sexually exploits maids in a manner that would get him lifted nowadays, and laughs a lot for no apparent reason. It’s entirely possible the other 397 and a half hours are more of the same.
Serra claimed not to be interested in the horror genre but he’s made an interesting counterpoint to Stoker’s novel with Dracula here as a liberator of poor servile women letting them turn against the patriarchy and become powerful instead of victims.  Endurance test The Story of My Death might be Serra is clearly a gifted filmmaker albeit one who likes to punish his audience. The director gave a charming introduction to the film in which he said it was okay if people walked out which may have been reverse psychology as almost everybody stayed to the end. I don’t ever want to see The Story of My Death  again save for a wordless sequence in which would be lovers flirt at the dinner table after a meal. Free of all the dreadful pretensions Casanova spouts about love and its meaning I’d rather have seen that movie instead.

I couldn’t get a ticket for Gravity so Erik Skjoldbjærg’s conspiracy thriller Pioneer proved a decent alternative. Set during the North Sea oil boom of the 80’s as the Norwegians are forced through inexperience and lack of resources to collaborate with an American company on finding ways to extract the oil from the depths. The expeditions are highly dangerous and involve experimenting with hitherto unused techniques. When Petter (Hennie) passes out during a test dive causing the death of another diver he resolves to find out what went wrong putting himself and those close to him in danger. Skjoldbjærg crashed and burned in Hollywood with a dire adaptation of Elizabeth Wurtzel’s  Prozac Nation (2001) while Christopher Nolan’s remake of his 97′ debut movie Insomnia put the British director on the Hollywood A-list but did nothing much for him. It’s easy to read Pioneer as a reaction to this with the plucky Norwegian battling the forces of American cultural imperialism but Skjoldbjærg presents both countries as having their own agendas with so much at stake. Pioneer is a tense, claustrophobic affair with a compelling lead performance from Aksel Hennie and good support from Wes Bentley, Stephen Lang, and Jonathon LaPlagia.