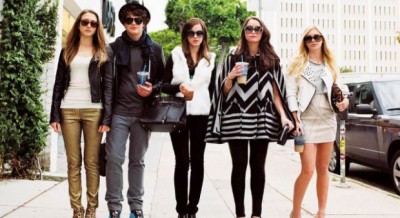 “What did Lindsay Say?“
Like a bitchy little sister to Sorkin/Fincher’s The Social Network (2010) Sofia Coppola’s movie shares similar thematic concerns of friendship in the social media age and modern celebrity. The Bling Ring is based on the Vanity Fair article ‘The Suspects Wore Louboutins’ by Nancy Jo Sales about a group of High School kids who robbed a bunch of celebrities of goods worth over $3 million. The group would check Facebook and online gossip sites for information about a particular celebrity to see if they were out of town, google the address, then find a way in without breaking and entering. They regularly turned over Paris Hilton’s fantastically kitsch mansion because the heiress kept a key under the welcome mat. Given the comic mileage Coppola gets from this amazingly furnished abode Hilton is either a great sport or still leaves her key under the mat and the director snuck the cast and crew in while the heiress was on one of her many holidays.
Shy and neurotic Marc (Israel Broussard) is pleasantly surprised to be taken under the wing of confident Rebecca (Katie Chang) on his first day at his new school. Rebecca shares his interest in celebrity gossip sites and expensive clothes. She pays for her outfits by stealing cash and valuables from parked cars. They graduate to breaking into a school-friend’s house then targeting the homes of celebrities. Other kids get involved including Nicki (Emma Watson) whose upbringing on a diet of adderall and her mother’s new-age religion means she talks in the kind of meaningless self-actualisation nonsense celebrities spout in interviews, and Chloe (Claire Julien) who wears her DUI like a badge of honour. At first the raids are low-key activities, but they soon gravitate to house parties which they are silly enough to boast about to impress their peers.
Latterly the invasion of a reality TV star’s glass-panelled home is observed coolly from a distance like a scene from Michael Mann’s crime thriller Heat (1995) before Coppola cuts to a security team watching over them. CCTV footage of this break-in ends up on the news turning them into media stars. Coppola’s aversion to moralising means the story is seen from the point of view of the kids. It’s why for most of the film their behaviour seems fun. She’s not condoning their activities but expecting the audience to work out they are a bunch of spoilt brats. Yet she is too kind a director not to feel something for them. A recurring theme in her movies is people who seem to have everything but still find themselves drifting aimlessly through life. They might be comfortable but there is some spark missing. Behind these kids obsession with material goods and being seen in the right places there is a basic human need to belong.

Coppola fetishisation of brand labels and the bodies of the young and the beautiful are often taken as examples of shallowness. The Bling Ring will only exacerbate those criticisms but her ephemeral film-making style and her empathy for those whose stories she tells make her one of the most intriguing and atypical voices in contemporary American cinema.