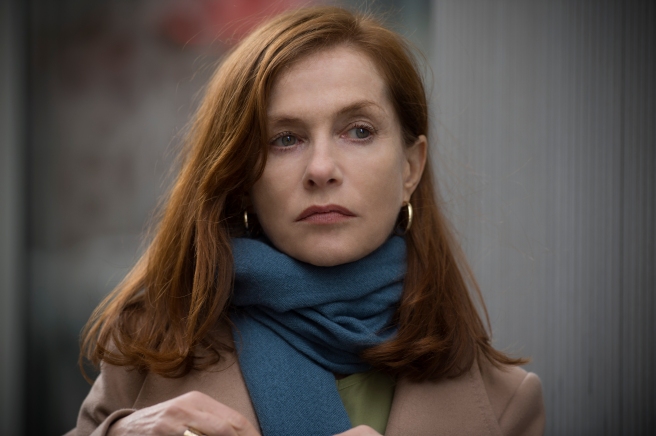 Fairly convinced Paul Verhoeven is engaged in the process of shaping his own CV so each film is part of a matching pair. Basic Instinct (1992) is a glossy Hollywood version of The Fourth Man (1983), Black Book a female tale of heroism to go with his earlier WWII epic Soldier of Orange, while Showgirls (1995) essentially tells the same story as his period drama Katie Tippel (1975), with a young woman trying to make her way in a workplace where men hold all the power and frequently abuse it. Now with Elle he reworks medieval action movie Flesh + Blood (1985) into a film that manages to be both a revenge thriller and a French comedy of manners.

Like Flesh + Blood it concerns a rape victim shifting the balance of power against her attacker by beginning a relationship with him. Video games CEO Michele (Isabelle Huppert) is brutally assaulted in her own home by a masked intruder. Rather than reporting the incident to the police she clears up the damage to her home and washes away the physical evidence by bathing. Though Elle may seem like Verhoeven is being deliberately provocative it’s his most restrained film to date, a character study of somebody who has already suffered a horrendous trauma (the matter-of-fact way Huppert reveals this is shocking and hilarious) and is capable of dealing with grief.

Michele refuses to be a victim and indeed proves stronger than those around her, most of whom are reliant on her for money or seek to use her as an emotional crutch. It wouldn’t have worked so well without Huppert who can play characters who refuse outright to ask the audience for sympathy (see also White Material). Maybe Adjani could have matched her but I’m not sure. It’s a complex and ambiguous film and I’m not sure I’ve got a handle on it after one Film Festival screening. Ivan Sen’s impressive sequel to 2013’s Mystery Road sees detective Jay Swan (Aaron Pedersen) once again searching for a lost girl in a remote area of Australia. Last time we saw Swan he was standing tall in true Western style having just faced down a violent gang in the outback, but it’s clear from Pedersen’s demeanour he’s no longer the same man. We learn later Jay’s drug-addict daughter from the first film has since died and he’s taken to drink in a big way. Sent out to the tiny mining town of Goldstone on “light duties” to investigate the reported sighting of a missing young Chinese woman he spends the first night in jail after being pulled over by local lawman Josh (Alex Russell) for drink-driving.

Josh  is the only lawman in town, but his job is basically breaking up drunken brawls and doing the bidding of local mining company boss Johnny (David Wenham, think evil Rhys Darby) and town mayor (Jacki Weaver). Josh might not be taking the cash bribes offered to him, but he knows when to let things slide. There is no evidence a Chinese girl was ever in Goldstone and nobody’s talking. Even the local indigenous community wants nothing to do with Jay. The sighting was called in by Maria (Ursula Yovich) months ago but it’s only now the authorities have taken an interest and sent him out there. Jay’s visit is watched over by company man Tommy (Tom E. Lewis) who warns him off the next day. Later his mobile home is machine-gunned by a biker gang.  Josh wants Jay gone before he causes any more trouble, while Jay thinks the Goldstone man is shirking his duties. Both rile each other into action. Jay to sober up and Josh to finally start acting like a cop despite the intimidation they both face from those intent on protecting their business interests at any cost.

Like Mystery Road the film utilizes the Western genre to tell a story about the culture clash between the disenfranchised indigenous community and those who seek to exploit the land for profit. The charismatic Pedersen’s taciturn hero is a wonderful creation, a man trapped between cultures but increasingly drawn back to his roots.  Once again he faces corruption from authority figures, an outlaw gang, and even a rival gunslinger (Aaron Fa’oso) this time but there’s a departure away from the realism of the first film towards a kind of mysticism where the land has a profound haunting effect on those who are willing to make a connection with it. Sen’s dialogue is occasionally portentous, but Goldstone is an ambitious film, beautifully shot (by Sen who also wrote the music and edited) with a rousing finale as the two lawmen join forces for a stunning showdown. There’s a sub-plot which hints at a possible third film and I sincerely hope they Pedersen and Sen make this a trilogy.

19. Three short stories by Anna Biller, whose latest film The Love Witch is currently winning acclaim on the Festival circuit. Biller writes, edits, designs the costumes, provides the music, directs, and occasionally stars in her own movies. She uses classic forms of cinema to tell stories about women’s roles in popular culture, all firmly located in the aesthetics of 1950s’ melodrama through their use of Technicolor and retro stylings. Though The Love Witch may prove to be her breakthrough movie she’s been working on short films and made her feature debut with in 2007 with Viva. In this 28 minute short film Biller creates three different musical narratives all built around herself as a woman being the subject of adoration.

In the first story ‘The Queen’s Sad Life’ Biller plays a melancholy Arabian Queen sitting alone in her palace. The set design recalls big epic Hollywood productions from the 40s’ and 50s’ when studios would greenlight movies based on stories from the Arabian Nights. She is visited by a Rajah who asks her why she’s so sad when she has everything she could want. The Queen describes the repetitive nature of her life in the palace, the isolation, the feeling of missing out on other things. The Raj admits he feels the same but then scolds her for asking difficult questions about the nature of existence. She turns to her consorts for comfort and they perform an old-fashioned song and dance number called ‘Let Us Dance’ to make her feel better.

In the second, ‘The Queen Bee,’ Biller plays an exhausted queen bee who is on the search for a place to build a new hive with her colony. Her followers describe potential locations for a new hive but none are suitable until the last member of the swarm returns and describes a place surrounded by flowers. In their new hive the worker bees all sing a song praising her as “the loveliest of bees.”

The final story, ‘The Queen Poinsettia,’ is set in the 60s’ as Poinsettia (Biller) and her friend Buttercup attend a house party together. There’s a live band present singing a song whose lyrics seem to be about a man pressurizing a woman into sex. “Please say yeah, oh don’t say no, yeah, no.” Poinsettia is so into the music she doesn’t notice she’s now the only woman there and Buttercup has left without her. The guys begin to come on strong so she runs from the house, but they follow her. When a handsome hero turns up on a white horse and saves her from harm the story turns into a fairytale. Poinsettia asserts her authority over her attackers by assuming the role of fairy queen and using “mystification” to turn them into dogs. Then she leaves them all behind,  including the now crestfallen hero, and escapes towards towards her castle in the sky.