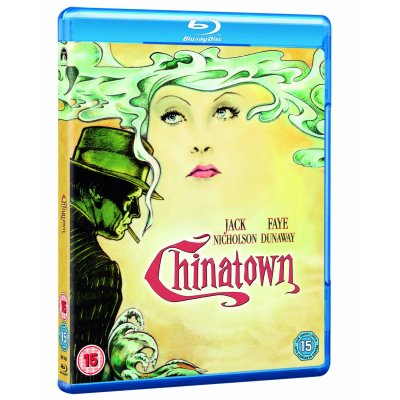 Chinatown (1974, Roman Polanski)
The product of four brilliant individuals, screenwriter Robert Towne, producer Robert Evans, star Jack Nicholson, and director Roman Polanski, Chinatown bounces the auteur theory on its head. Jake Gittes (Nicholson) is a Private Investigator specialising in divorce cases who is duped into exposing an apparent affair between Hollis Mulwray, chief engineer of the local water company and a young woman. When the real Mrs Mulwray (Faye Dunaway) turns up armed with a lawyer Gittes realises he has been used and starts to do some real detective work. Much of the film is spent observing Gittes as he puts his case together, visits locations, and slowly pieces together the truth. It may borrow the form of the classic detective movie but Chinatown is so much more than a genre pastiche. Instead of a lost object being sought after as in The Maltese Falcon the city itself is up for grabs. Gittes is a tarnished knight in the Marlowe mould but more fallible.
Chinatown is not just one of the great American movies but one of the great movies about America. Towne based his screenplay on real-life double dealings in the city of Los Angeles and a conversation with a cop who worked Chinatown and described minimalist approach to law enforcement in a place where nobody was quite sure what was going on. Polanski brought in by Evans to direct and lured back to Los Angeles for the first time since Sharon Tate was murdered brings an embittered eye to the city. No director has ever been less interested in sentimentality or more aware that terrible things can happen to people than Polanski and he was right to insist the film should end as it does. Sad that while the USrelease has a wealth of extras including a commentary track by Towne and David Fincher the UKdisk is vanilla flavoured. Paramount seems to be saying forget it Jake, its Chinatown. Or possibly just fuck you. 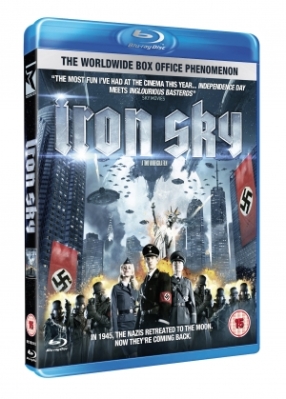 Iron Sky (2011, Timo Vuorensola)
Much more fun than expected Iron Sky mixes a killer premise with a campy satirical tone. In fact it reminded me a lot of the final season of the cult science fiction show LEXX (1997-2001) which hid its intelligence behind its outrageous storylines and weird humour. In 1945 Nazi’s went to the moon and have been there ever since just waiting for the opportunity to return and finish what they started. They have a new Fuhrer (Udo Kier) but their technology is hopefully outdated. Only when they capture a USastronaut/male model (Christopher Kirby) and realise his mobile phone is more powerful than their computer do they realise they have the power to return to Earth. Towering soldier Klaus Adler, played by Gottz Otto (Tomorrow Never Dies), is sent down to prepare for invasion. Tagging along for the ride are Renate (Julia Dietze) who has been indoctrinated to believe Nazism is peace-loving and The Great Dictator (1940, Charles Chaplin) is a short film about how nice Hitler was. It’s funny, takes a welcome aim at US self-interest, and for a low budget movie Iron Sky looks great. There are a few perfunctory extras and a digital download.

A Room with a View (1985, James Ivory)
It is unfashionable these days to admit you like a Merchant/Ivory film but A Room with a View is the team’s best work. Based on E.M. Forster’s novel, Lucy Honeychurch (Helena Bonham-Carter) is the young Englishwoman whose passions are aroused by a holiday in Italy and an encounter with the handsome but odd George Emerson (Julian Sands). There’s a great performance from Daniel Day-Lewis as her pompous but ultimately sympathetic fiancé Cecil, who personally I always had more time for than the impulsive George. He might be a snob but at least he has a sense of humour. There’s a decent set of special features here. BBC Breakfast Time interviews with Simon Callow and a giggly Day-Lewis, an archive report on the film’s success in America also from Breakfast Time, and a report from ‘Film 96’ on the Merchant/Ivory pairing. There is also a rather dry tribute to E.M. Forster aired by the BBC after his death in 1970. It is interesting to watch Forster being talked about before his revelatory posthumous novel ‘Maurice’ was published a year later.