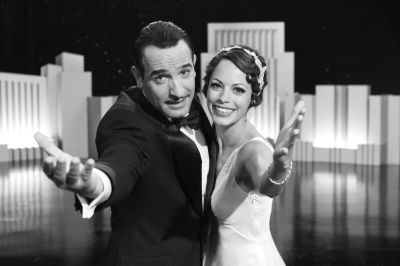 The Artist won five Oscars at this year’s Academy Awards including Best Picture, Best Actor, and Best Director. Not bad for a black and white silent French movie. A sensation at the Cannes Film Festival back in May 2011 the film was quickly snapped up by film producer Harvey Weinstein. An expert at distributing movies and getting them noticed by the Academy Weinstein previously led films as diverse as The Crying Game (1992, Neil Jordan), The English Patient (1997, Anthony Minghella), and The King’s Speech (2011, Tom Hooper) to box office success and the Oscars.
Silent movie star George Valentin (Dujardin) basks in the success of his latest movie. Accompanied everywhere onscreen and off by his beloved canine sidekick Valentin is the biggest star in town, but his refusal to adapt to the arrival of talking pictures puts his career in jeopardy. A young starlet Peppy Miller (Bejo) whom Valentin helped get started in Hollywoodreplaces him in the public’s affections and he is quickly forgotten. That is by everybody except Peppy who keeps an eye on her old mentor but knows he is too proud to accept her help.
Director Michel Hazanavicius and Dujardin previously worked together on a couple of comedies OSS 117: Cairo Nest of Spies (2006) and its sequel OSS 117: Lost in Rio (2009). Expertly sending up the spy movie, most notably the Connery era Bonds they showcased Dujardin’s physical athleticism and his ability to make a conceited idiot likeable. Hazanavicius skilfully recreated the look and feel of the Sixties spy film so successfully both of these movies seemed to belong entirely to the period they were set in. The Artist too feels like a genuine silent era film, right down to its use of intertitles and its reliance on composer Ludovic Bource’s wonderful score to accompany the images.
Valentin bears a passing resemblance to silent screen star Douglas Fairbanks, one of the most charismatic and physically agile performers ever to grace the screen. Footage from Fairbanks great swashbuckler The Mark of Zorro (1921, Fred Niblo) even appears in the film briefly, edited into a sequence with Dujardin dressed as Zorro. The resemblance is purely physical though, Valentin shares Fairbanksdelight in his own athleticism and his considerable charm, but not his intelligence. Fairbankswas smart, experimenting with sound, co-founding United Artists, and the UCLA’s film department.
Though cult filmmaker Guy Maddin has directed full length silent movies, notably a stunning ballet version of Bram Stoker’s novel Dracula (2002) his work is only really of interest to film buffs. The Artist however succeeds as a loving tribute to the silent era and as a mainstream crowd-pleaser. Cute dog too.