Skip to content
One of my favourite film festival memories is a screening of Savage Messiah (1972) at the Filmhouse in Edinburgh at the 2010 EIFF with director Ken Russell in attendance. As a teenager in the early 90’s I had stumbled across a video copy of his 1986 movie Gothic with its lurid cover of a beautiful woman in a nightgown with a tiny red demon balancing on her chest.

My kind of film I thought. I had no idea then this was Russell the art lover recreating a painting by Henry Fuseli. I was a kid. The Lair of the White Worm (1988) also satisfied. Any film featuring Amanda Donahoe offering Dynasty star Catherine Oxenberg as a sacrifice to a giant snake has to be admired.
By this time Russell’s reputation was in decline and the mainstream media caricatured him as a naughty eccentric. Oddly enough he became more familiar to readers of the tabloid newspapers thanks to his primetime adaptation of Lady Chatterley’s Lover (1991) which made fantastic use of Sean Bean and Joely Richardson’s naked bodies. There was even a brief appearance on Celebrity Big Brother in 2007, but the film industry ignored him.
In recent years though there has been a growing appreciation of Russell’s career. Pleasingly much of this re-evaluation has been led by the Sight and Sound crowd. Russell was one of the most visually inventive directors Britain has ever seen, a pioneer of the drama-documentary, and the Romantic spirit. The Savage Messiah screening was part of this reassessment and the film may well be his masterpiece.
The Devils (1971) is rightly celebrated and will receive a DVD release soon but not sadly in the form Russell originally intended.

Then there’s his great work for the BBC’s arts series Monitor, especially ‘Pop Goes the Easel’ (1958) which captured the emerging youth culture which would come to dominate the 1960’s.
Yet the film I reached for when I heard of Russell’s death was one he regarded as a hack job. Harry Saltzman hired Russell to direct the third Harry Palmer movie. Billion Dollar Brain is one of Ken Russell’s best films but tends to be ignored by fans of spy movies for being too unusual, and also by fans of the director for being too conventional.

Wrongly considered a failure, Billion Dollar Brain mixes the conventions of the spy genre with a dreamlike atmosphere. There are hints of the direction his career would take as the camera closes in on yet another painting, or moves around a blistering orchestra performance of Shostakovich’s music as Harry is brought face to face with an old ally. There is also a lovely performance by Francoise Dorleac as a double agent. 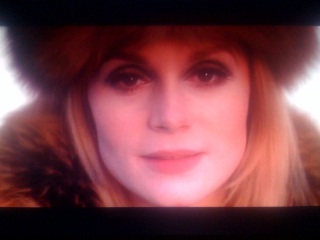 This was Dorleac’s last movie. She died in a car crash shortly after filming finished. Composer Richard Rodney Bennett provides a haunting theme which often announces her arrival onscreen. “I will show you the secret places I used to go as a girl. I will take you to the paths of the forest” she says to Palmer. Who could resist?

Though Russell struggled for funding in his later years he did make one final memorable contribution to cinema history. In the little-seen portmanteau movie Trapped Ashes (2006) Russell’s segment ‘The Girl with the Golden Breasts’ is a typically outrageous effort about a woman whose cosmetic surgery leaves her with a pair of vampiric breasts.