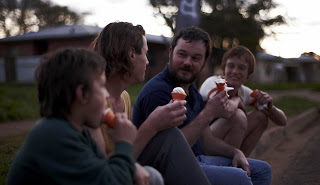 There are only a couple of hundred residents in Snowtown and not much in the way of local amenities. The local bank shut down in the late 90’s and an outsider from Adelaide rented the premises. John Bunting stored barrels containing the dismembered bodies of eight people in the bank’s vault. They were filled with acid which presumably Bunting thought would dissolve the remains. Instead he was inadvertently preserving them by using the slower acting hydrochloric acid. The police were suspicious when Bunting’s associate Robert Joe Wagner was linked to three missing persons-reports and began investigating the duo. This led to them the bank where they found the barrels along with their killing tools. These crimes were nothing to do with the townsfolk of Snowtown, but now Bunting’s handiwork carries their name.
As does Justin Kurzel’s movie Snowtown which is one of the most disturbing films I’ve ever seen. It is an endurance test, particularly during a prolonged strangulation which is horrifying in its intimacy. Yet Snowtown is undoubtedly a moral work, never glamorising Bunting (Daniel Henshall), but instead showing how this amiable soft spoken outsider was able to manipulate a teenager into becoming his accomplice. We see everything through the eyes of Jamie (Lucas Pittaway) as he learns his matey new father figure is in fact a ruthless killer targeting homosexuals or those he suspects of being paedophiles. There are no characters offered to the audience to provide some kind of respite from this horror, no scenes of policemen putting together a case, or any sense of moral order . We’re trapped watching Jamie slide into the abyss.
Jamie might be 16 but he’s already worn down, a rape victim, easily led. Had somebody else gotten to him first they might have been able to point him in the right direction but he’s easy pickings for a manipulator like Bunting. The lives we are shown in this grim sunless suburb of Adelaide seem empty and hopeless. Save for a scene where there is a dance in a local pub and director Justin Kurzel uses slow motion for a moment making the scene strangely poignant. This is the only moment of compassion on show in Snowtown.
Maybe the film is more bearable for it. Kurzel and screenwriter Shaun Grant imply these murders were emblematic of a disenfranchised underclass feeding on each other. They have no interest in making us care about these characters. The deaths of Clinton Trezise and Michael Gardiner don’t fit into this pattern. They are not in the movie either as both men were murdered before Bunting met Jamie. The details are heartbreaking though. Trezise had slight learning difficulties but was apparently happy and excited to be living on his own for the first time. Gardiner was only 19-years old, openly gay, and liked to dress flamboyantly. They were missed. Not by many it seems, but they were missed.